Okay, I want to play with all of you. Here is the next Part of "Pictures" ... maybe you will like it, though I'm not so sure about it in the moment. There are much too good stories around during the last days ...

And, btw, A wonderful Sunday for everyone around! 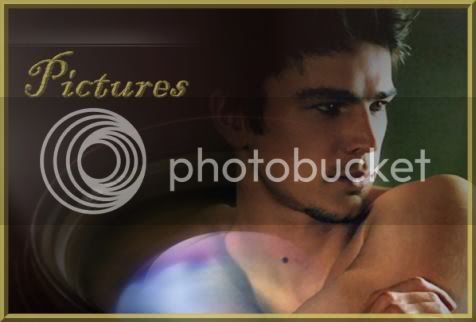 
One week had passed, since they had finally talked openly. A wonderful, crazy week. Casey had enjoyed every minute of it. But, nevertheless, sometimes there were questions bothering him ... What actually connected him with Zeke?

They did everything what friends liked to do together - as well as they had done it before.They worked at the farm, they had a lot of fun, they could talk for hours about all and nothing. The afternoons they mostly spent at the lake. Casey was always taking his camera with him, but his favorite motif had changed.

Casey loved to discover Zeke with the help of his camera. Over and over anew. It gave him the possibility to explore every bit of Zeke without having to look at him directly. Sometimes he thought of the pictures of Brian he had taken last year. He wondered what would happen if he asked Zeke. The idea of making such photos of him was thrilling. But finally he didn't dare to ask. Probably he would be unable to take a least one decent shot. Zeke was just too sexy.

They were more than just friends.

Zeke had always insisted that he was not the guy for a steady relationship. Everything Casey had heard at school confirmed this. Zeke liked clubbing and parties, and Casey was sure, he never needed to go home alone. Zeke was a guy for quick, smooth sex - he wanted fun and he wanted a lot of it. But this impression didn't fit to his current behavior.

For weeks now he was just hanging out with him. No clubs, no parties, no girls and definitely no other guys than him. Zeke wanted him! Casey was sure about it. What surprised him was his willingness to wait. He never pushed him. He was ready to give him all the time he needed, more time he needed.

When they were at the lake, sometimes talking and laughing, sometimes silent and dreaming, he always lay in Zeke's arms. Their gentle, smooth kisses had become more passionate. Zeke had always loved flirting and teasing with him, but this had changed, too. Zeke took it careful and slow, but all his necking and petting promised a lot more.

It had been yesterday. It seemed to be one of the hottest days of summer. Zeke had unbuttoned his shirt. Casey could only stare at him. He had seen him naked before, once after the gym at school and once in the morning in his house in Herrington. But never before he had been so near to him. God, he looked so damned good, tanned and brawny.

Zeke felt Casey's unsure look and gripped his hand. He pulled him down to the blanket and rested his head on Casey's chest without saying a word. Slowly he started to caress him.

Casey closed his eyes. It felt so good. He could feel Zeke's slow, hot breathing through his thin T-shirt, he could feel soft, careful hands, circling over his chest, searching fingers pinching his nipples slightly.

But when Zeke finally reached for the hem of his T-shirt he flinched.
"Take off it," Zeke whispered.

Casey didn't knew what to do. Yes, he wanted it. He wanted to feel it, his skin at Zeke's skin. But: he knew how he looked like. He was too small, he was lanky, he had no muscles, his skin was pale, because he never dared going out without his T-shirt. He looked like  ... nothing!

He felt Zeke's arms, wrapped around him. A smooth kiss.
"Please! Take off it. I want to feel you!"

It was impossible to refuse this request. Halting he allowed that Zeke pulled the shirt over his head. He didn't dare to look at him, but he could feel his look resting at him. Zeke stretched out his hand and touched his chest slightly. Then he chuckled.

"Hey," he whispered softly.
"Everything okay! No need to be embarrassed. Everything looks just perfect!"

When he bent over and started to kiss and caress him again, Casey stopped thinking. He got lost into his feelings. He didn't want this to stop ever again. But at last Zeke did. He looked at him grinning.

"Fuck you, Zeke!"
Casey squirmed around for more contact between them. He wanted more, more of this.
"Oh please! Don't stop now!"

Casey groaned and squirmed a bit more.
"I hate you!"

Zeke started to suck at one nipple softly. Casey reared up.
"Don't try to fool me, baby. You fucking love it," laughed Zeke.

Casey chuckled when he remembered yesterday's afternoon. Yes, he did! It was like a new, thrilling game and he loved it to play. Even if he had wished once again to kill him, because of his stopping at this point.

Even if he couldn't imagine where all this finally would lead to.

Only six weeks and the vacation would be over. Back to Herrington. Back to their everyday life with all the problems and trouble around.

From his parents he had heard nothing since weeks. And no matter what has happened, he missed them, especially his mom. But he couldn't imagine a way back to them without abandon his dreams.

He couldn't do this. He wouldn't do this. In his dreams he always imagined to be in Frisco at art school. Though he didn't know at all if they really would accept him. Of course, Zeke and Brian and also his grandma encouraged him over and over again, but deep inside he was highly scared that his dreams might burst like a soap bubble.

And last but not least: Zeke. Casey wasn't sure whether their relationship would last in Herrington. Probably for Zeke all this was just a summer flirt. Back in Herrington everything would be like it had always been, but hopefully they would at least stay friends. For Casey this meant a lot - he had never had friends before - he had never had trust someone as much as he could trust Zeke ...

But even if it would last ... In a few months they would graduate. Casey would go to San Francisco. Of course, he really wanted this, but it would be the definite end of his time together with Zeke. Zeke would remain in Ohio.

Recently he had told Casey that he had applied at the Community College in Herrington. The chance to get in was good for him. Casey had been so glad and proud to hear this, because he knew that he had contributed to the making of this decision. Over and over again he had asked Zeke not to dump his future just to displease his father. The Community College was not what he had wished for Zeke,  Zeke deserved so much more, he was a fucking genius when it came to science. But at least it would be a beginning ...

Nevertheless, there was a part in him who writhed while he was thinking about this. If Zeke remained in Ohio, it meant the end of his dreams about a shared future with him. He knew, it was just an illusion, but a part of him had already started to dream about being in Frisco, together with Zeke ...

Zeke's voice startled him out of his thoughts.

"What are you doing? Daydreaming again?"

Casey looked up, directly into these challenging sparkling, wonderful eyes and he smiled. This was the here and now. This was all what counted in the moment. He wouldn't waste time with pointless, murky thoughts about the future. He wanted to enjoy every minute he spent with Zeke. During these days he belonged to him, only to him.

Casey got up and grinned.
"Ready for everything!"