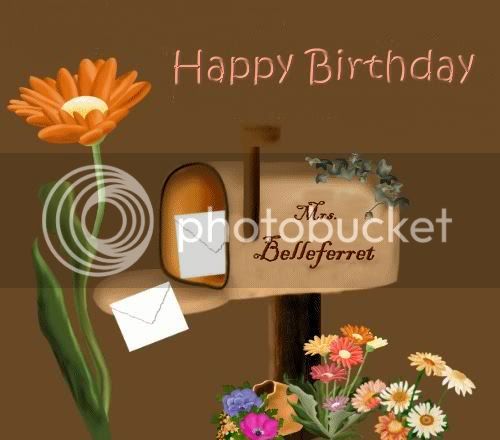 I hope, you have a wonderful birthday!  Enjoy it, you really deserve it!

It was a long, long time ago I wrote my last Mr. Smith story ;) But here is a little bit for you ...

He had done it again.

They'd met for dinner in the canteen. The young man, Derek, was new here and had sat down beside him at the table. And he'd started to tell: about his parents, his brother and from Oildale, the small city where he had grown up.

"Oildale," asked Smith.
"Oildale in California? But this is impossible! From there I come, too. Then we are almost neighbors."

For the next hour they shared their past. Bad memories, but good ones too, before the Big Death changed everything. But then Derek had to go and Smith stayed back alone and thoughtfully.

He had done it again.

There was only a great emptiness in him. Sometimes he meant to be able to remember fragment-like. Then there were pictures in his mind, but they were brief and blurred and afterward he couldn't even say if they had been reality or only a dream.

He'd learned to live with it, but sometimes he was desirous of sharing memories about other times with other people. It was so easy! Only a little lie: "I come from Oildale, too." And there was it, the familiarity, the mutuality and for a short time he wasn't lonesome any longer. It was just an illusion. It was not his past which he shared there with others, but nevertheless, he looked for these rare moments again and again, because for one hour they gave him the feeling to be just like all the others be.

He looked up when a hand touched his arm tentatively.
"Smith! Everything okay?"
Kurdys voice sounded a little worried. Apparently he'd tried to speak with him quite repeatedly.