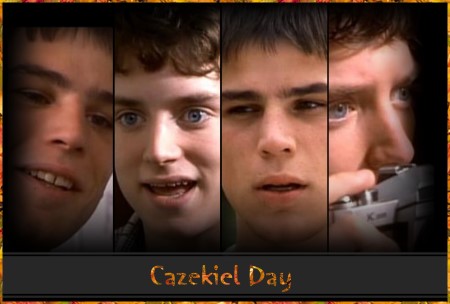 Is it just me or is the time running? It's Cazekiel day again ( almost over :( and I haven't done much more than some cooking, watching TV and a tiny bit of writing). But there are still some stories I want to share with you, so here we go.

It's a re-post (what else can it be? ;) ) from another community I joined some time ago =

fan_flashworks. I'm a freak, I know, but everything that keeps me writing is welcome.

With the heart up to his mouth, Casey entered the living room. His Mom had looked very serious when she had asked him to come down.

„There is something we need to talk about,“ she had told him.

He couldn't imagine anything else but Zeke. Since the alien incident at school last year they had started to hang around together often; no one else could understand what had happened during that night where they had saved the world. It turned into a close friendship quickly. They had more in common than Casey had ever considered it possible.

Since two months they were lover. All, Casey had secretly dreamed about since ages but never dared to talk about, suddenly was in reach. Never before he had felt that happy … with one downer. He didn't know how to tell his parents about his changed future plans.

It was complicated. They loved him, they had always backed him up, had accepted his dreams. But Casey knew well enough, that his father had had a hard time when he had told him that he wouldn't follow his footsteps and go to Harvard but to Art School in New York. And his Mom, she never talked about it, but secretly she hoped that Casey would meet a nice girl one day, that he would marry, that there would be grandchildren.

How could he disappoint them again and admit, that he wasn't just a photo-geek but a gay photo-geek who wanted to live together with his boyfriend? A boyfriend, who was well known as a rebel, a bad boy.

His father smiled at him when he entered the living room while his mom didn't even look up from a big, gray envelope in front of her.

Mrs. Connor looked up, her face unusually pale and Casey was sure that she had cried. He cringed. Oh no.

„You never did, Casey. You were the son I always wanted. The cutest baby I've ever seen; you barely cried and when you smiled no one could resist you.“
She grabbed for a tissue and sniffed, while her husband gently put his hand on her shoulder.

„What your Mom tries to tell you, is, that we always loved you, from the very first moment we saw you. You were so small, born too early, tubes needed to help you to breath. But it never was a question, that you are our son.“

Slightly confused Casey was looking from his mom to his dad and back again. This was not what he had expected to hear and he didn't know what to think about it. Mr. Connor cleared his throat, then he grabbed for the envelope on the table. When he opened it, Mrs. Connor gasped for air, tears running over her face openly now.

Only a second later Casey was beside her.
„Mom, what's happened,“ he asked, feeling alarmed and helpless at the same time.

„I'm sorry, Casey,“ she whispered and wiped her tears away.
„I know, I'm overreacting. It's just … this brings back all the memories.“

„What kind of memories?“

„The day you came into our life,“ his father answered.
„You already was ten days old.“

Suddenly the world seemed to stop turning around. Casey dropped back into his chair, much too shocked to think straight.
„What … what is this supposed to mean?“

Mr. Connor pulled a picture out of the envelope and put it on the table right in front of Casey. He couldn't take his eyes off it. The young woman at the picture looked so familiar; curly brown hair, like his own, sparkling blue eyes, like his own; she was small, skinny, like he was.

Finally, he brushed the picture from the table and shook his head.
„No,“ he said.
No, he was not willing to think this out.

His father bent down to pick it up before he turned to Casey.
„She gave life to you not only once, but twice, “ he said.
„And she deserves it that you get to know the truth.“

„No!“
Casey still refused to listen.
„This cannot be. You are my dad. And Mom …“
He turned around the Mrs. Connor who looked at least slightly calmer now.
„You are the best Mom I can imagine. I don't need another one.“

She smiled.
„Thank you, Casey.

But I'm sure she would have been a good mother for you, too, if she had gotten a chance for it.

She was young, eighteen years old and she was all alone. The father an alcoholic, the mother … who knows. Your father is a guy from the circus, I'm sorry, I can't tell you anything about him.

But despite everything, she loved you, she wanted to change her life for you. She found a job, a small apartment, she had even bought some stuff for you. The little teddy, you loved so much."

She sighed deeply, before continuing.
"Until a stupid accident changed everything.“

Mrs. Connor paused. Casey had listened, feeling stunned, the urge to yell: 'Just shut up, I don't want to hear all these lies' was overwhelming. But deep inside he knew, his parents … and they were his parents, they had grown him up, they had loved him and nothing could ever change this … would never come up with such a cruel cock and bull story.

„An … an accident,“ he stammered and risked another glance at the picture on the table.

Mr. Connor nodded.
„A truck crashed into the bus she was sitting into. A lot of people got injured. She … was trapped and had to be extricated by the fire department. Her injuries were bad, the medics at the hospital had to make a decision. It was either to save her life … or yours.“

Casey swallowed when he noticed tears in his father's eyes; he had never seen him that churned up before. It was Mrs. Connor now, who put her hand on his husband's arm and squeezed it.

„She was a good girl,“ she said, her voice trembling.
„So young. So alone. And so strong.“

She looked at Casey and smiled again.
„She wanted you to live. So they did the surgery, c-section, of course. You were too young, you couldn't breathe on your own, it was critical also for you. But you was a fighter … like … like your Mom. One week later you two were still alive; though it was just a matter of time for your Mom, they couldn't do much for her, just relieve her pain. But you started to be better with every day.“

„When I married your Mom,“ Mr. Connor continued.
„We knew that we wanted to have a great family. But it was not granted to us; your Mom lost two children during the first three months and the doctor told us that another pregnancy might by her death.“

„He suggested thinking about an adoption. We weren't sure about it at first and after some long talks with the welfare and the adoption agency we decided to become foster parents. When you were ten days old and it was sure, that you would survive, we got the call.“

Mr. Connor visible relaxed, while Mrs. Connor put her hand on Casey's, smiling wide now.
„When I saw you, I knew, a fosterage was not enough. You were the son I always did see in my dreams. Maybe it was destiny that I couldn't give birth to a child. Because you were supposed to be our son.“

Finally, the dam broke, Casey threw his arms around his mother, sniffing slightly.
„I love you, Mom, I love you much. You are my parents, and we don't need to talk about all this anymore.“

„But we should,“ Mrs. Connor answered.
„I have made a promise.

She was very weak when we got the call, but still alive. She asked for meeting me and how could I deny that?

I was sitting at her bedside, hold her hand. She was so much like you, Casey. We didn't talk much, she was much too tired. Ready to go … after she could be sure that you would be loved for the rest of your life.

I've promised her, that we will tell you about her when you are old enough. This …“

She grabbed for the large gray envelope and pushed it to Casey.

„This is her legacy for you. Some old pics. Poems she did write for her unborn child. You should read them, Casey. She was a wonderful, young and talented woman. And she would have been a great mother for you.“

The voice made him jump. His eyes wide open he turned around and there he was. Zeke! The one he needed most in this moment where his whole world broke into pieces. But … this was impossible, wasn't it?

He was pulled into strong arms, the warmth of Zeke surrounded him, his smell of cigarettes and the expensive shower gel he always used, his gentle voice.
„Shh, it's okay, geek boy,“ he whispered.
„Everything will be okay again.“

„Your dad visited me this morning. We had a nice, long talk. He asks me to come by because you will probably need someone after this confession. How could I deny that?"

Casey licked his much to dry lips, his head was buzzing. He looked from Zeke to his dad, his mom …

Mrs. Connor smiled slightly.
„You can never fool a mother, Casey. When she loves you, she will know, what's going on your head.

And I am your mother, I always was."