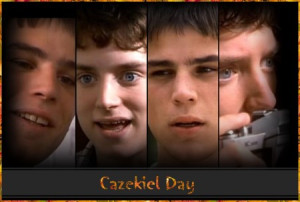 Re-Post of a comment_fic - Prompt: Mixed signals = any, any pairing, what he/she thought was the beginning of a breakup talk turns out to be a proposal (okay, I admit, it actually isn't a real proposal, sorry)

Title: Breaking up
Fandom: The Faculty
Character: Casey & Zeke
Words: 572
Rating: PG
Disclaimer: as ever, I don't own The Faculty, neither the boys or any other person from the movie


Casey's heart was up to his mouth. He barely dared to look at Zeke, much too afraid that he would be able to read the panic in his eyes.

Well, actually he had always known that this day would come. They had had some great months together; secretly, of course, and Zeke had never made any promises. But together with him all of Casey's dreams had come true and he had enjoyed every moment. Rainy afternoons in Zeke's garage, with cheesy movies and pizza from Joey's, the trips with the GTO at the weekends.

And ... mindblowing sex. How long he had felt like the only gay guy of Herrington until Zeke had turned his world around. Hard to believe that it hadn't been just a dream. Zeke was a wonderful teacher; experienced but surprisingly patient and careful. He had never forced him to anything; he had never laughed at him, he had just taken him into his arms and kissed away all his concerns.

Casey fought back his tears and finally looked up. The glance in Zeke's hazelnut brown eyes was unusually serious.
"It was high time to make a decision," he said.

"I think you are right!"
He could hardly believe that his voice didn't tremble. No drama. No drama! Not here and now.
"It doesn't make sense. You in Ohio and I in Boston."

Casey blinked.
"No, of course not! It will be better for both of us to move on."

It did hurt to see Zeke relaxing visibly. For a second Casey wondered how long he already had known that this would be the end. Next moment he felt Zeke's arms around him, soft lips touched his.
"I love you."

What? Casey froze in every movement, then he pushed Zeke away with all his remaining strength.
"Don't say that," he hissed, barely able to hold back the tears for longer.
"Fuck you, Zeke, you can't do that!"

He stormed out of the garage, but Zeke stopped him before he reached the carport where the GTO was parking.
"Case. Casey. Wait. What's wrong? What did I do wrong?"
The panic in his voice was hard to ignore.

Casey stared at him with narrowed eyes and gasped for air.
"Please, Zeke, let this come to an end. You say you want to break off. Okay, I can accept that. But you need to hurt me even more. Don't say things you don't mean."

"Oh shit!"
Zeke paled visibly and closed his eyes.
"Case, I'm sorry, okay. You know, I'm not good with words," he stammered.
"Yes, I want to break up. With everything around here. I'm so tired of living alone in this much too big house. Of pretending to be someone I'm not. Of meeting you secretly.

I want to leave all this behind. Start a new life. In Boston. A life together with you. Because you're the only one who has ever meant anything to me."

Woah. This was an even bigger shock as the moment he had thought Zeke would dump him. Casey's thoughts were racing; he felt unable to transform his feelings into coherent words.

"Case?"
Zeke's whisper finally brought him back into reality.
"Everything okay between us?"

He threw his arms around Zeke, not caring about curious looks from neighbors or passers-by.
"I'm afraid, it will get pretty cramped in my small apartment," he murmured and kissed him.
"Love you, too!"