I've managed to write a first story for the Bingo-Challenge at GyWo ( just a story, not a Bingo ;) ) and I want to share it with you. I've decided to start with the picture which seemed to be the most difficult one at first look. 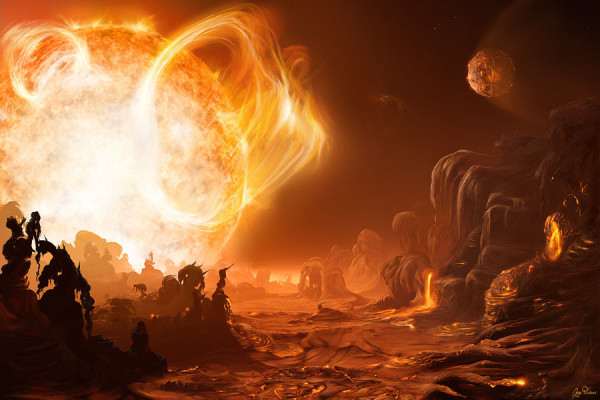 Title: Nightmare in Orange
Fandom: The Faculty
Character: Zeke &amp; Casey
Rating: R
Word Count: 934
Disclaimer: Of course, I don't own The Faculty nor the character :( - I'm just borrowing them for a while

He was trapped in a nightmare. And he knew there would be no awakening. Stokely had tried to make them believe that it would be sufficient to kill the Alien Queen to capture the victory, to save the world. Casey knew better now.

He had been the last man ... no, the last boy ... standing and he had done what needed to be done. A wild chase through the now empty halls of the school. The other students, the teachers, even Sister Harper, the school's nurse, all of them infected by the aliens, ready to be taken over or to die.

The chase ended under the bleachers. It was just him and Mary Beth, she still looked like the innocent, pretty girl but she was the host of an Alien Queen. Casey could feel her overwhelming power, when he lifted his arm, his fingers clutched the pen with the Scat. The drug which was supposed to kill her, to bring all this to an end.

With full force he drove the pen right into her left eye, he could hear her ear-piercing whining, then she started to change. Her arms and legs turned into long, slimy tentacles, her body into an outsized, grey, blurred mass, her eyes suddenly seemed to flicker in every color Casey could imagine. It was a scary but somehow intriguing sight.

When she started to squirm and wriggle, when the light in her eyes started to fade, Casey dared to hope that maybe, against all odds, this was the end. But she managed it to gather all her remaining strength, she straightened up and it almost seemed as if she was smiling, when she opened her mouth and throw all her spawns right into his face.

He would never forget the pain, like many small cuts with sharp knives; before he could cry the larvae flashed into action and started to gouge their way into his head. Deep and deeper, he could smell them, taste them, feel them when they took over control of his body and his mind.

At the end, they pulled him over into their world. A nightmare in orange. Fire. Heat. Pain. Unbearable pain. He knew, he wouldn't be able to survive for long. No one could, this world was a dying one. No sanctuary for any kind of life, just bald rocks, in glaring orange, heat, and fire, the flames would reach you, no matter where you tried to hide, the hot lava would find its way even into the smallest gaps and it would swallow up everything that had been beautiful and endearing once.

Water! Agonizing the knowledge that every kind of water on this planet was long gone. The basic element of every live. Millions of years ago, when this planet had been young and untouched, the life came into existence, in the depth of the oceans. Over the centuries they had developed and taken possession of the planet, not caring about the consequences. Until the nature had started to repel the exploiters. What was left behind was a dying world, without any hope.

Like through a thick haze, a voice reached him, a familiar voice. He gasped for air, burning hot air, piercing pain, panic. Unable to tell where reality started, where the nightmare ended. Where was he? Who was he? Everything felt so strange but so familiar at the same time. The doomed planet, the home of the creatures, he had called aliens once, was he one of them now, lost in infinite space and time? Or was he still on earth, ages and ages in the future, when all human beings were long gone and the earth started to die? Because he, Casey, had failed.

Almost against his own will, he forced his eyes open. The shock hit him with full force. The orange was gone, like the heat, the rocks, the sun. Glaring, white light, cold, so cold. The locker room at school, the benches turned over and broken, the doors from the locker open, ripped out. The coach would get furious when he noticed this chaos. Casey started to shiver uncontrollably.

Another voice. Stokely?! He didn't dare to turn his head, to look at her. She was dead, he had seen her dying. They all were dead. Or puppets in the hands of the aliens. Like him! He cried out when the memory came back, the pain when MaryBeth throw all her remaining spawns right into his face while she was dying.

What did this mean? When the queen was dead, was he the king now? The king of the aliens? Was this the reason why he was still alive? Was he alive? No! He leaped to his feet, his hands reaching for his face, he could feel the small unevennesses on his skin. No! He didn't want this. He didn't want to be the one who would exploit the earth until not more was left than a burning hot fireball. Panic filled him, his fingers curled around the scars and he tried to rip them apart.

"Hey, slow down."
Someone grabbed for his hands, hold them with a firm grip.
"It's okay. They're gone. I had to give you an extra shot of Scat but now it's over. We are all gonna be okay again. Because you did save the world."

The soft voice, the warm hands, suddenly Casey felt more protected and comforted than ever before in his life. Finally, he dared to turn the head. Zeke! And it didn't matter anymore if this was reality or still a dream. As long as Zeke was there, everything was good.