Hello my friends. It's Cazekiel-Day again and my story today is written for one of the most wonderful ladies I met here on LJ. I know most of you will know and love her too.

honeyandvinegar, this story is for you - for all you did for our boys - and because I really, really hope that your dream will come true. 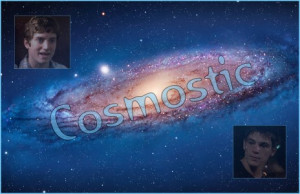 Title: Cosmostic (1 / 1)
Fandom: The Faculty = Zeke / Casey
Rating: G
Summery: How a Kickstarter Project did change the boys life
Disclaimer: The Faculty and the boys are not mine, of course ;)
„Hey. What are you doing? Chatting with the boyfriend again?“

Casey turned around to Zeke who had just entered his room and rolled his eyes.

„Shut up,“ he said but grinned anyway.
„Jason is just a friend from my astronomy forum. He did send me a link yesterday. Cool thing.“

Though Zeke was not as a big space-geek as Casey he stepped closer, put his hands onto Casey's shoulders and lent forward to have a look at the computer monitor. Every chance was welcome to get nearer to him … he just couldn't get it why Casey didn't seem to notice all this. Usually the boy had good instincts, he knew when someone showed interest in him … like this stupid guy in the club last weekend. How Casey had flirted with him …

„Isn't this a great idea?“
Casey's cheerful voice tore him out of his thoughts.

„The whole space captured on a T-shirt. Oh, I so wish that she will make it happen. She's already half through it and ...“
When he noticed Zeke's questioning look he stopped and giggled.
„You don't know what I'm talking about.“

„It's a Kickstarter Project,“ Casey explained.
„When you have a secret dream, you can start one to collect some money to make it happen. A lot people do this. Often it's for charity, like, I will do this and that, to help a friend who's child got seriously sick and needs expensive meds now. Sometimes there are really eccentric ideas though. My friends double dared me to take a full-sized bath in delicious pasta with tomate sauce. Now I need your help to buy all the needed ingrediants. That's ridiculous, of course, and I can't get it why people should waste their money for this.

But Vee's idea is just great. She makes T-shirts with a cosmic-inspired design. Have a look at this ...“

He turned on the video which was embedded on the website too. A young woman started to talk about her hobby and that she would like to make more out of it. Slowly all pieces started to fall into place. When she did show some of the work she had already done even Zeke had to admit that the shirts looked unique, but …

„That's so geeky," he grinned.

Casey smirked.
„Well, I am a geek, so one of these shirts would be perfect for me. I'm sure a lot of people would like to have one. Vee just needs to be able to start her small business. That's why she does this Kickstarter Project.

I'm already a backer. Unfortunately I did buy some photo stuff last weekend so I could only spend 10 dollars.“

Zeke knew well enough how much this was for Casey who only got little pocket money.
„You don't even know her,“ he said.
„So hopefully she will know to appreciate it.“

„Oh, I'm sure she will. Jason met her once at a space convention in Boston, he says, she's cool.“
Casey sighed.
„I just wish I could get one of the shirts she will make for backers with 65 dollars and more. Already asked my mom if she would advance me the money. But of course she said no, told me to spend my money for something more sane.

What's wrong with it when you try to help someone to make his dream come true, huh?“

Zeke felt slightly nervous while he was waiting at the school's parking lot. It was Casey's birthday but of course this was no reason for him to skip the art course like most other students probably would have done. When the boy finally arrived he was in a good mood.

„Hey,“ he said cheerfully and threw his schoolbag onto the backseat.
„Any plans for the afternoon? Maybe we could go to 'Mike's', have some ice cream. My treat. I got some birthday money from my grandma.“

Okay, this was the keyword.
„It's your birthday?“

„Zeke, you are a shit.“
Casey pulled the face.
„Obviously everyone seems to remember, just my best friend not.“

Zeke eyed him thoughtfully.
„I don't care much about other people, Case, but I care about you,“ he said.

His heart felt up to his mouth. It didn't happen often that he opened up against others but it was about time to face the reality. He would either have a boyfriend this evening or he would have lost a friend.

He turned around to pull out a small package from behind his seat. It was wrapped in dark blue paper with a white ribbon. Usually he didn't do shit like this but he had somehow managed it that it looked fine.
„Happy birthday, geek-boy.“

Now Casey looked surprised.
„It's for me?“

Casey laughed and finally took the package. He squeezed it carefully, shook it, looked slightly confused but curios too. Zeke knew the reason for it. Too soft and too light for a book or some photo-stuff Casey had probably expected. Carefully he tugged at the bow, tried to open the paper without ripping it, as if it would be something valuable he didn't want to destroy. Zeke bit his lower lip, when he finally pulled the paper apart. There it was.

Casey gasped for air and stared at the shirt in his hands. A shirt based on the Andromeda Galaxy. Zeke had looked up what felt like thousand pics from the outer space and finally decided to choose this one because … just because. He looked at Casey, how amazed he still was, how overwhelmed. No matter what would happen next, this moment alone was worth every dollar he had spend for the shirt … more than necessary … money had never been a problem for him and why not help VeeJean to fulfill her dreams?

„This is … this is ...“
Casey pressed the shirt at his chest, still fighting for words. Then he jumped at him, threw his arms around Zeke's neck.
„Thank you … thank you ...“

„It's blue,“ Zeke murmured and felt like an idiot. It's blue? Finally he did hold him in his arms and all he could say, was: It's blue? What the hell was wrong with him?

„Vee asked me if I have a pic in my mind she can work with. I choose this one because it's blue. A sparkling, mysterious blue. Deep and endless. You look at it and you don't mind to drown in it.“

„Yeah,“ Casey said and chuckled.
„The space is like that. It's intriguing“

„I'm not talking about the space.“
Zeke hesitated only shortly.
„I'm talking about your eyes. They are blue like the colors on this shirt.“

Casey blushed, his eyes flared wide.
„Ähm ...“
He was still looking for an answer when he suddenly was interrupted by Zeke's lips which meet his, soft, warm, caressing. All he could do was to give in.